Named after the federal Davis-Bacon Act passed in 1931, California enacted its prevailing wage law, otherwise known as the Little Davis-Bacon Act, more than fifty years ago. California’s prevailing wage requirement begins at section 1720 of the California Labor Code. Both federal and state prevailing wage laws are designed to ensure that skilled construction workers employed on public works projects are paid at least the wages and benefits that “prevail” in their local communities and that so-called unscrupulous contractors will not import unqualified workers from other parts of the country who will undercut the local workforce by working for lower pay.

In more recent years, some states have pushed to and successfully limited or abolished prevailing wage laws. Governor Pete Wilson attempted to guide California down this road but organized labor fought back and won. On June 1, 1999, Governor Gray Davis signed SB 16 protecting California’s prevailing wage law. The aftershocks of the 2008 economic meltdown only increased the prevailing wage pressures because charter cities sought to limit the payment of prevailing wages and costly project labor agreements. Fast forward to 2012 – 2013 where Sacramento has doubled down on its efforts to protect union jobs through several pieces of legislation, some of which may be unconstitutional. 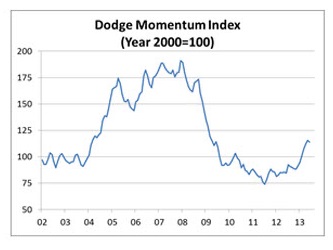 The graph above falls into the “picture is worth a thousand words” category. The Momentum Index, published by McGraw Hill, is a monthly measure of the first (or initial) report for nonresidential building projects in planning. The data clearly show the bottom in 2011 with a steady increase in projects since then. Governor Brown signed SB 7 despite heavy opposition from many public entities. Many fear that this legislation will delay major construction projects in an economy that is already slowing because of cyclical forces or the lingering effects of the government shut down. As one watchdog group’s headline put it: “Gov. Brown signs SB 7 to neuter Charter Cities.”

SB 7 would prohibit a charter city from receiving or using state funding or financial assistance for a construction project if the city has a law permitting contractors to not pay prevailing wage provisions on public works contracts. While there are other provisions of the bill, this provision is the most controversial because it arguably infringes on the rights of charter cities. California’s Constitution provides that charter cities (as opposed to “general law cities”) are allowed to maintain control over their municipal contracts.

On July 9, 2012, Haight alerted its clients to the California Supreme Court case of State Building and Construction Trade Council of California, AFL-CIO v. City of Vista, (2012) 54 C4th 547. In that case, the City of Vista (a charter city) contracted to have two fire stations built. These contracts did not require compliance with the Public Wage Rate Act. The Supreme Court held that wages of contract workers constructing locally funded public works are a municipal affair, and that wage levels of contract workers constructing locally funded public works was not a statewide concern.

It is too early to tell where things will go from here or whether there will be some activity in the court system to challenge the validity of SB 7. As SB 7 only applies to funding, contracts or bids received or awarded after January 1, 2015, we anticipate pressure to challenge the law will ramp up as that date approaches.

According to information from the State Building & Construction Trades Council of California website, the goal of AB 1336 is to “…ramp up prevailing wage enforcement…to extend the statute of limitations for recovering lost wages due to prevailing wage violations from six months to 18 months. These companies cheat workers on prevailing wage in order to provide the lowest bid, undermining honest contractors who pay workers fairly and base their bids on efficiency.”

In addition to back pay and interest, contractors face penalties of up to $200 per day, per worker, for each day prevailing wages were not paid. For sake of example, if a contractor has ten workers on site for 60 days, the penalty alone could be as much as $120,000 for failing to pay prevailing wages.

Many contractors mistakenly believe they have no prevailing wage exposure when, in fact, they do. “Public works” are broadly defined under California Labor Code §1720 to include the construction, alteration, demolition, installation, or repair work done under contract and paid for in whole or in part out of public funds. [Emphasis added]. While there are exceptions to this general rule, the scope of this rule is broad enough to ensnare unsuspecting contractors. Further, even if a public entity contributes no money to private development, but the public entity requires improvements to public infrastructure as a condition of approval, prevailing wages must be paid to those employees who perform that portion of the work.

Under existing law, the Labor Commissioner has 180 days after the filing of a valid notice of completion or 180 days after acceptance of the public work, whichever occurs last, to issue a wage assessment. Labor Code §1741. Additionally, a joint labor-management committee may file a court action to enforce the provisions of the prevailing wage laws within the same timeframes. Labor Code § 1771.2. AB 1336 would extend these time periods to 18 months from notice of completion or acceptance. If an assessment is issued by the Labor Commission, the contractor can request a review, but the “contractor or subcontractor shall have the burden of proving that the basis for the civil wage and penalty assessment is incorrect.” Labor Code §1742. Moreover, the general contractor is liable for the failure of its subcontractor(s) to pay any wage assessment and may be liable for penalties in some circumstances. Labor Code §§1743 and 1775(b).

Finally, penalties may be assessed even prior to the investigation if the contractor fails to provide certain payroll information. Labor Code § 1776(a) requires each contractor and subcontractor to keep accurate payroll records documenting hours worked, work classifications, and actual wages paid. Each payroll record shall be verified by a written declaration that it is made under penalty of perjury, stating the payroll information is true and accurate and that the employer has complied with various provisions of the Labor Code.

The contractor or subcontractor has ten days to comply with the request and, upon the failure to do so, shall forfeit one hundred dollars ($100) for each calendar day, or portion thereof, for each worker, until strict compliance is effectuated. Upon the request of the Division of Labor Standards Enforcement, these penalties shall be withheld from progress payments then due. Labor Code §§1776(h).

According to James Orellana, CFO, of James E. Roberts-Obayashi Corporation, the original version of AB 1336 extended the enforcement period up to three years but the time period was thereafter reduced to 18 months due to lobbying efforts of contractors. Mr. Orellana states: “the additional time for enforcement prolongs the exposure to real problems if you have a subcontractor who is not complying with the law.”

So, what is a contractor to do to protect itself from possible violations of the prevailing wage laws? First, on contracts that are with public entities, carefully read the bid documents. Those bid documents should clearly outline the prevailing wage requirements. If questions arise, the contractor would be well advised to bring them up at the pre-bid conference or prior to the time that bids are due.

If the contractor confirms that prevailing wages are due, the contractor must then determine the general wage rate. These rates should be in the bid documents and are also available at the Department of Industrial Relations website at http://www.dir.ca.gov/OPRL/PWD/index.htm.

If uncertainty still exists, the contractor may within twenty days after the solicitation of bids, file with the Director of Industrial Relations a verified petition to review the determination of any such rate or rates upon the ground that they have not been determined. Such determinations under this section shall be final and shall be the determination of the awarding body.

Finally, according to Mr. Orellana, the best way for a contractor to protect itself is to verify the wages paid by the subcontractor through, among other things, on-site employee interviews and reviewing sign in sheets and time cards. Although this is an administrative hassle, the failure to do so could lead to missed opportunities in uncovering subcontractor non-compliance.

In the after-math of the explosion and fire which devastated the Chevron Corporation oil refinery and surrounding community of Richmond, California, Governor Brown established an interagency workgroup charged with examining ways to improve public and worker safety. In July of 2013, the workgroup released a draft report including findings and recommendations relating to the qualifications and skill of the workers employed in oil refineries and correlated these factors to overall public health and safety risks. Accordingly, sponsored by the State Building and Construction Trades Council, a bill was born mandating, among other things, worker training and prevailing wage on this once private industry.

Effective January 1, 2014, SB 54 (the bill brought by Senator Hancock of Berkeley arising out of the oil refinery investigation and signed by Governor Brown) converts California’s oil refineries to “public works,” forcing the hiring of the State Building and Construction Trades Council and requiring that the refineries pay prevailing wage to members of this labor union, elbowing aside a significant group of the refinery workers union. Public works law, including the requirement to pay prevailing wage, has always been limited to public projects or projects funded with public dollars. This legislation is the first legislation that applies to prevailing wage rates to private industry and is a dramatic expansion of public works law in the name of safety.

Ensuring that employees have good wages and benefits is paramount to the success of business; however, this recent extension in prevailing wage requirements to private facilities using private capital is a significant expansion of government regulation. It also raises the question of whether prevailing wage requirements should or will be extended to other private, as well as public, projects. While this particular bill is only focused on oil refineries, it appears to be part of a growing trend when considering other legislation that was recently vetoed.

Governor Brown recently vetoed SB 615 which would have required the payment of prevailing wages on certain heath care projects.

SB 615 would have defined health care construction projects as “public works” and would require payment if the project was funded in whole or in part by conduit revenue bonds even if the project was otherwise a “private work.” Conduit revenue bonds are municipal bonds, the proceeds of which are utilized by nongovernmental entities (e.g., hospitals and health care facilities). Cal. Gov’t Code § 5780. Governor Brown vetoed this bill on October 13, 2013 stating that the legislation would result in “unbudgeted state enforcement and investigative costs.”

Each year California seems to find a new way to unroll the welcome mat to the oil industry and SB 54 is in line with that policy goal as California strives for an economy based on renewal sources (i.e., A.B. 32 – The California Global Warming Solutions Act.) At the same time, California – like the rest of the nation – is on the brink of a massive uptick in the demand for health care given our aging population. SB 615 was not consistent with expanding the availability of health care. In fact, some will argue that the Governor’s veto of SB 615 is an admission that prevailing wage requirements impose far too significant cost increases to construction projects.