[This verdict appeared in the October 15, 2021 Daily Journal Verdicts & Settlement Section as a Top Verdict – read it here]

This case arises out of a tractor-trailer versus motorhome rear-end collision on Interstate 15 northbound at approximately 11:45 p.m. on May 24, 2017. Defendant Donald Williams, Jr. was driving a tractor-trailer while pulling a trailer owned by Machado Custom Hayloading, Inc. Defendant Williams was driving his rig at 56 mph when he rear-ended the motorhome, which was traveling at 40 mph. At the time of the incident, plaintiff Olga Belikova (then 23 years old) was driving a 1977 Ford Fairwinds motorhome. Her brother, Edgar Belikov (then 32 years old), was a front seat passenger. And, Alexander Kleshchenko (then 31 years old), was asleep in the back of the motorhome at the time of impact. See below photographs depicting the damage to the motorhome and truck. 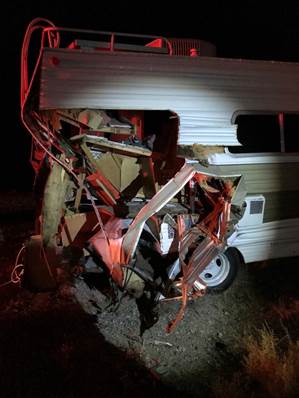 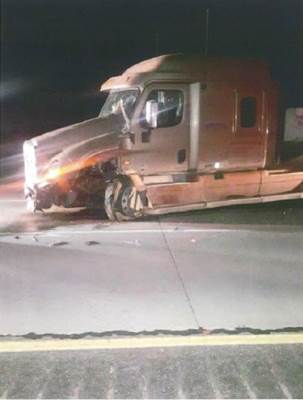 Plaintiff Olga claimed she sustained a traumatic brain injury, that she had ongoing problems with headaches, a laundry list of debilitating impairments in cognitive function, emotional issues, fatigue, and lower back pain radiating into her right hip. She also claimed to have suffered from intermittent left-sided hearing loss; memory problems; loss of concentration, affecting her ability to complete tasks and read; dizziness; extreme fatigue; mental and emotional distress; irritability and agitation/poor frustration tolerance; difficulty sleeping; and lack of appetite. She also complained of neck pain; upper and lower back pain, including a 5 mm disc herniation at L5-S1, which her treating orthopedist testified required a $200,000 surgery.

Plaintiff Alexander complained of headaches; pain in the neck, including bulging discs, left shoulder, left arm, left wrist, chest and left-sided rib cage, upper back, mid-back, and lower back, including disc bulges/herniations and annular tears at L4-5 and L5-S1 with radiating symptoms down his buttocks and left leg. He also claimed to have suffered from a permanent brachial plexus nerve injury that caused permanent numbness in his left arm for which he is still treating.

Plaintiff Edgar claimed he sustained a mild traumatic brain injury (including, headaches, nausea, lack of focus, irritation and frustration, dizziness, blurry vision, loss of memory; and loss of energy); pain in the back of his skull; depression; neck pain, including clicking, bulging discs and a syrinx from C2-C5; upper back pain; mid back pain; low back pain; and bilateral hand pain, numbness and weakness (right greater than left)). Edgar claimed the impact was so strong, he broke the seat he was sitting in, which caused his to recline back at 150 degrees. Edgar claimed he continues to suffer from lack of focus, which affects his ability to multi-task, with continued complaints of intermittent irritation, frustration, depression, head pain, back pain, mid back pain, and numbness/tingling in his right hand. His treating orthopedist testified that he required back surgery at the cost of $200,000.

Because Defendants admitted liability, plaintiffs presented evidence relating to causation and damages.  Specifically, plaintiffs retained Jai Singh, an accident reconstruction and biomechanics expert, who testified that the Delta-V generated by the impact was as high as 20 MPH, and that a mechanism of injury existed as to all of plaintiffs’ claimed injuries.

Defendants admitted liability and disputed causation and damages. The defendants retained Michael Callahan, an accident reconstruction expert, who disputed Mr. Singh’s reconstruction and testified that the severity of the impact was significantly less than the Delta-V calculated by Mr. Singh. Defendants did not retain a biomechanics experts to counter Mr. Singh’s opinions on the biomechanics of the injury. Defendants presented evidence that while the motorhome was totaled in the accident, the impact did not cause plaintiffs’ injuries, that none of the three plaintiffs were surgical, that Olga and Edgar failed to meet their burden regarding their TBI claims, and Alexander did not sustain a nerve injury (brachial plexus), which his treating doctor, Dr. Jeremiah Carlson, testified was a permanent injury.

Prior to trial, plaintiffs alleged special damages in excess of $725,000, which was comprised of two low back surgeries and epidural injections, past medical treatment, and loss of personal property. Plaintiffs demanded that Great West Casualty Company pay its policy limits of $2 million. Plaintiffs also issued statutory offers for a total of $2 million. Prior to trial, Defendants issued statutory offers totaling $600,000.

[This verdict appeared in the October 15, 2021 Daily Journal Verdicts & Settlement Section as a Top Verdict – read it here]